The capital city of Andalucia 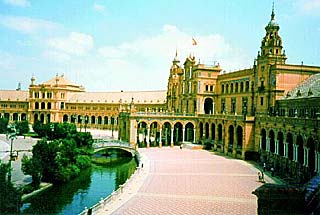 Most visitors are drawn to thisÂ province by its capital, Seville, Andalucia’s largest city and its administrative centre. In Seville is Europe’s largest historic quarter, so it’s crammed with magnificent churches, convents, monuments and Moorish buildings. It’s also renowned for its multitude of tapas bars and a buzzing nightlife; in summer, evening is the best time to stroll through the winding streets and pretty squares, to escape the fierce, unrelenting heat of the day.

One of Europe’s biggest cathedrals is here, the vast Gothic Catedral whose famous minaret, the Giralda, is the best place for a bird’s-eye view of the city. Nearby is another of the city’s most impressive sights, the elaborately ornate Mudejar palace of the Alcazar. Close to Seville is the ruined settlement of Italica, one of the Roman Empire’s most important cities, which you can still today a huge amphitheatre and intricate mosaics.

Wooded hills to the North

If you need some rural relief, head 90km north of Seville for the wooded hills of the Sierra Norte Natural Park. This gently rolling section of the immense Sierra Morena has some delightful mountain towns and villages to explore, many with a ruined hilltop castle, elegant churches and welcoming bars. It is superb walking and cycling country with lots of waymarked trails.

Marshland to the South

South of Seville is the Guadalquivir river plain that flattens out into a somewhat monotonous landscape relieved by the occasional whitewashed town or village, the most interesting of these being Lebrija and Utrera.
Southeast of Seville is Alcala de Guadaira and, close to the Cadiz provincial border, the charming hilltop village of Moron de la Frontera. Both of these retain remains of their important Moorish heritage.

The Guadalquivir river estuary has several important wetland sites, which are popular with migrating birds in spring and autumn and, in winter, flocks of wildfowl. Brazo del Este Natural Area is the most remarkable of these and features a large population of purple gallinules along with over 200 species of other birds. Near the river delta is a series of lakes in the Lebrija – Las Cabezas Natural Reserve and the Utrera Natural Reserve, both of which also attract a significant number of birds. The Guadalquivir delta forms part of the protected environs of the Donana National Park.