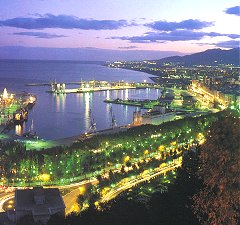 Malaga is best known for its string of popular resorts along the Costa del Sol and although these have their own attractions, the province has much more to offer, including a vibrant provincial capital with a fascinating history, a section of the Costa del Sol east of Malaga city that is not as developed the western section and rugged mountain ranges like the Serrania de Ronda and the Sierra de Tejeda.

Many visitors to Andalucia head directly to the Costa del Sol directly from the airport, 6km west of Malaga city, missing the myriad delights of the provincial capital. There is a charming historical quarter, interesting museums, bustling shopping streets packed with great shops, a buzzing nightlife and city beaches lined with excellent seafood restaurants.

The Costa del Sol is the most developed and densely populated coastal strip in Andalucia, packed with resorts such as Fuengirola and Benalmadena, which have busy beaches and high-rise apartments. But each place still has its own unique appeal, such as the beautiful old quarter in Marbella and its swish restaurants, good for a bit of celebrity spotting if you are lucky, an attractive long expanse of beach in Estepona and, if you are after a lively nightlife, Torremolinos. If you want a rural quick-fix away from the Costa, head north of Marbella to Sierra Blanca, to the pretty villages of Ojen and Monda. Just north of Fuengirola are Mijas, Alhaurin el Grande and Coin.

The Costa del Sol also includes the less spoilt coastline east of Malaga, with the resorts of Rincon de la Victoria, Torre del Mar and Nerja, the latter offering a delightful promenade and a famous cave, the Cueva de Nerja. Just east of Nerja is a small but beautiful stretch of coastline, the most spectacular in Malaga province, which is protected. The Acantilados de Maro-Cerro Gordo Natural Area are magnificent cliffs with secluded coves and sandy beaches covering part of the shore between Malaga province and La Herradura in Granada province. The drive along the coastal road gets increasingly dramatic as you head east from Malaga city, because the mountains of the Axarquia to the north meet the Mediterranean at this point, plunging directly into the sea in steep, rocky cliffs.